Skip to content
Folks, what we’re looking at is known as the Geo, and even though it’s not a real bicycle, and only a design project by a group of students from South Korea, it still includes a hint of where inner-city bicycle design could be headed in the very near future.

Three students were involved in this venture, Cheolhee Lee, Dahae Lee, and Hyewon Park. But before we continue, we must mention that this project includes absolutely no information as to what, when, where, and why, meaning we’ll be mainly discussing what we think is found in the designs and what sort of tech may be used.

To understand how the final design came to be, we need to first take a look at the never-ending ideas that sprouted beforehand. As we do this slight analysis, we understand that the Geo is not meant to be some rugged downhill racer, or even a cargo bike, it’s meant to be just a simple city commuter.

The final design shows this to be true, and the frame geometry is meant to be as compact and simple as possible, taking its inspiration from geometric shapes, hence the name. When I initially saw this design, I thought it could be a bike that is easily collapsible, but it isn’t. The entire frame includes no folding possibilities, so what you see is what you get.

The first noticeable trait is the frame. Here, we are shown a frame that has absolutely nothing to do with anything we’ve seen thus far on our site. I don’t even know how to describe it. We have the classic handlebar, stem, saddle and seat post, but once we reach the frame, we see a top tube that doubles back underneath and acts as the down tube.

Here is where it gets a bit tricky. We can clearly see the down tube being disrupted by a circular component. It’s here we’re led to believe that the Geo could be an e-bike. Why? Well, because one image shows us a young lady carrying the upper half of the circle in her hand, as if a battery pack. If it is, that’s one neat looking juice box. If it isn’t, then it’s just one neat storage basket. 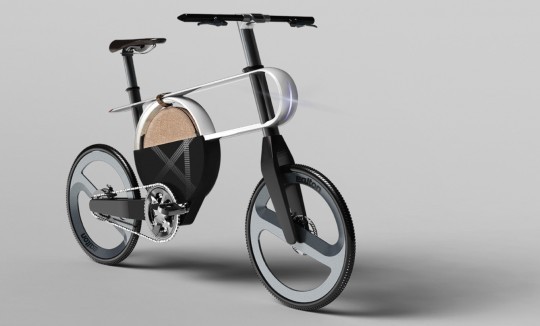 But the chance of the Geo being anything else other than an e-bike, are slim. Why? Because with the current trends in commuter bikes, electric seems to be the target. If we look closely at the rear wheel, another component that helps sustain the e-bike idea is what looks to be a hub motor. Or is the motor hidden in the rest of that circle we see in the center of the frame. Could this really be a mid-mounted drive bike?

Yet there are some aspects that seem to attract a designer’s eye. The handlebar I mentioned earlier looks very ergonomically fit for your hands. Even that weird top and down tube too has some sort of appeal to it.

However, it would seem that the Geo actually raises more questions than it answers. So, until we get a clear view of what everything does, don’t get your hopes up in seeing this bike anytime soon. But if it ever does make it into a real vehicle, it’s one I personally would consider buying, maybe. Depends on the price and test ride.

Intense selling new 951 series bikes through Costco.com and other channels